I am one of six siblings with the best mum and dad. A fifth generation ‘Local’ and privileged to have such a colorful life in the best location in Australia.

Living close to the beach on the beautiful Byron coastline and I never sit still. I’m high energy, quick witted, love a laugh and a chat and will give just about anything a go.

Not only do I swim, surf, fly trapeze, trampoline, walk, run, ride, I am partial to a glass of bubbles! And oh, I love chatting about weddings! 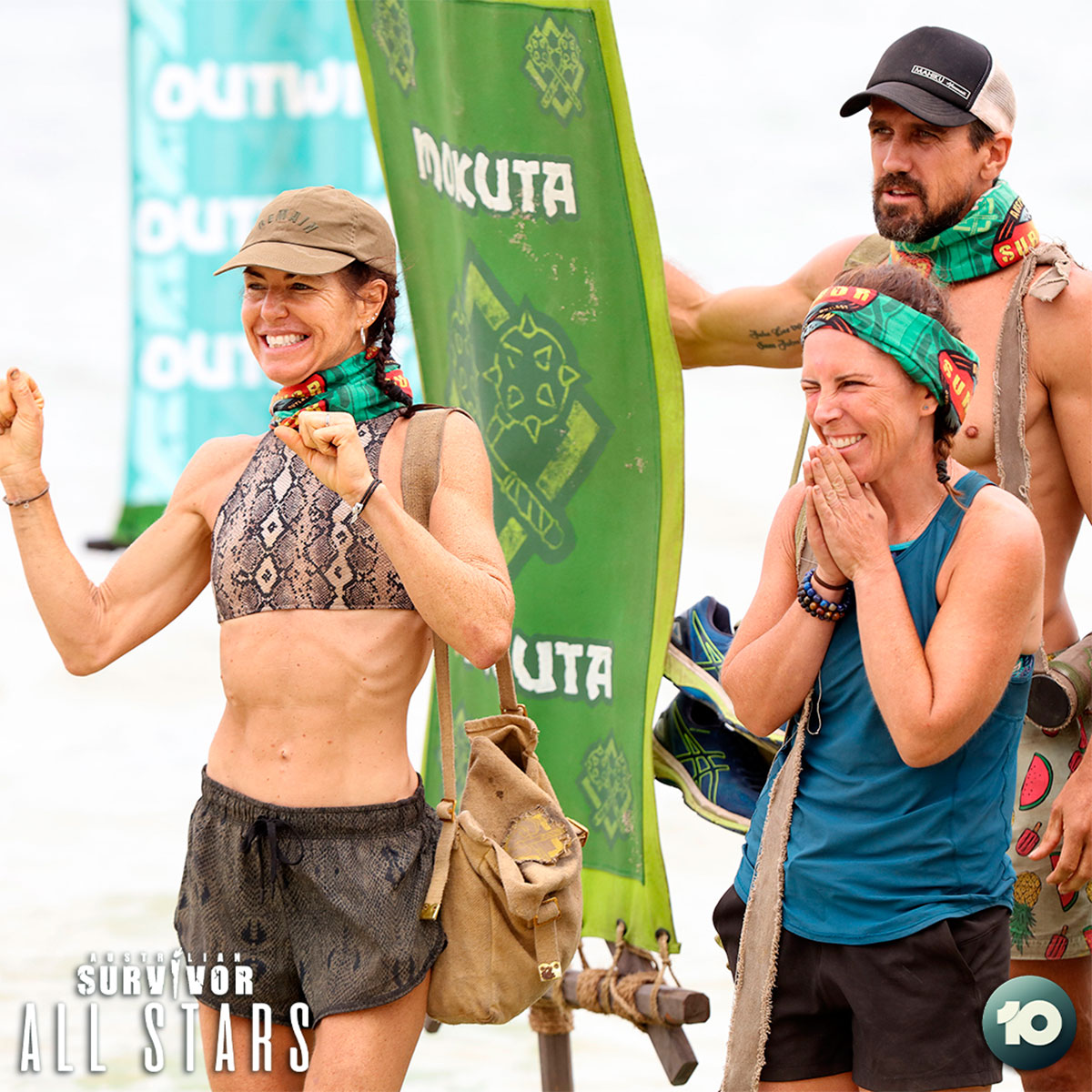 5 great reasons to go with me!

. Love writing mind blowing ceremonies that will take your day to a whole new level of awesome

. Organised, in command and chaffing at the bit to get the party started

. Full time Marriage Celebrant at Byron Bay so I am free to travel for destination weddings

I’m fortunate enough to be a full-time Marriage Celebrant at Byron Bay consequently it allows me to be very generous with my time. Doing weddings gives me a deep satisfaction just from making two people ecstatic on the most important day of their lives. It’s an incredible high!

The raw emotion, the excitement and the flood of genuine feelings gets me every time. When the bride and groom are buzzing, I am resonating with them. Tears, laughter, joy – bring it on!

Ask me for all the top venues and locations (and a few of the secrets). Guaranteed I can hook you up with all the best wedding services and I am just a phone call away. 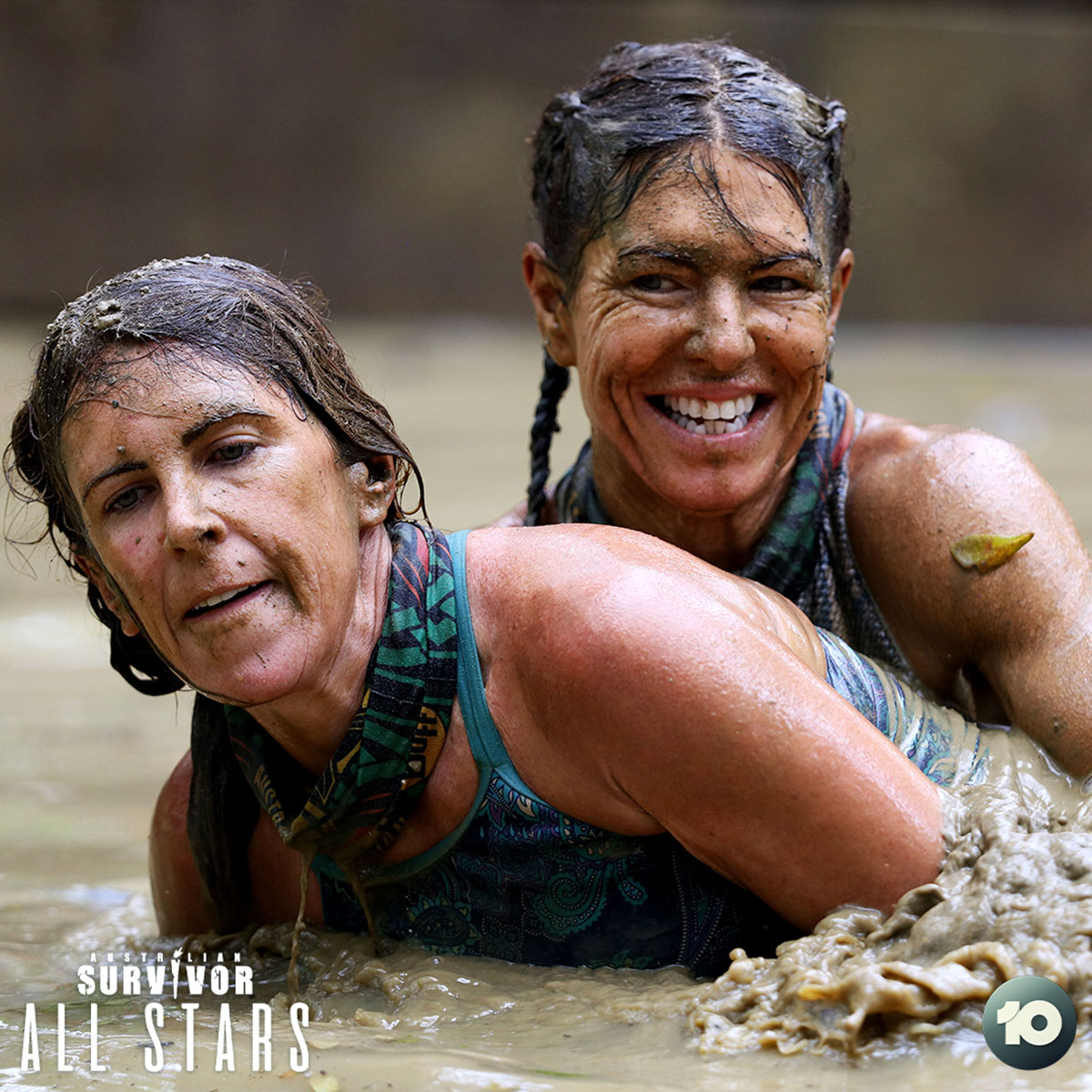 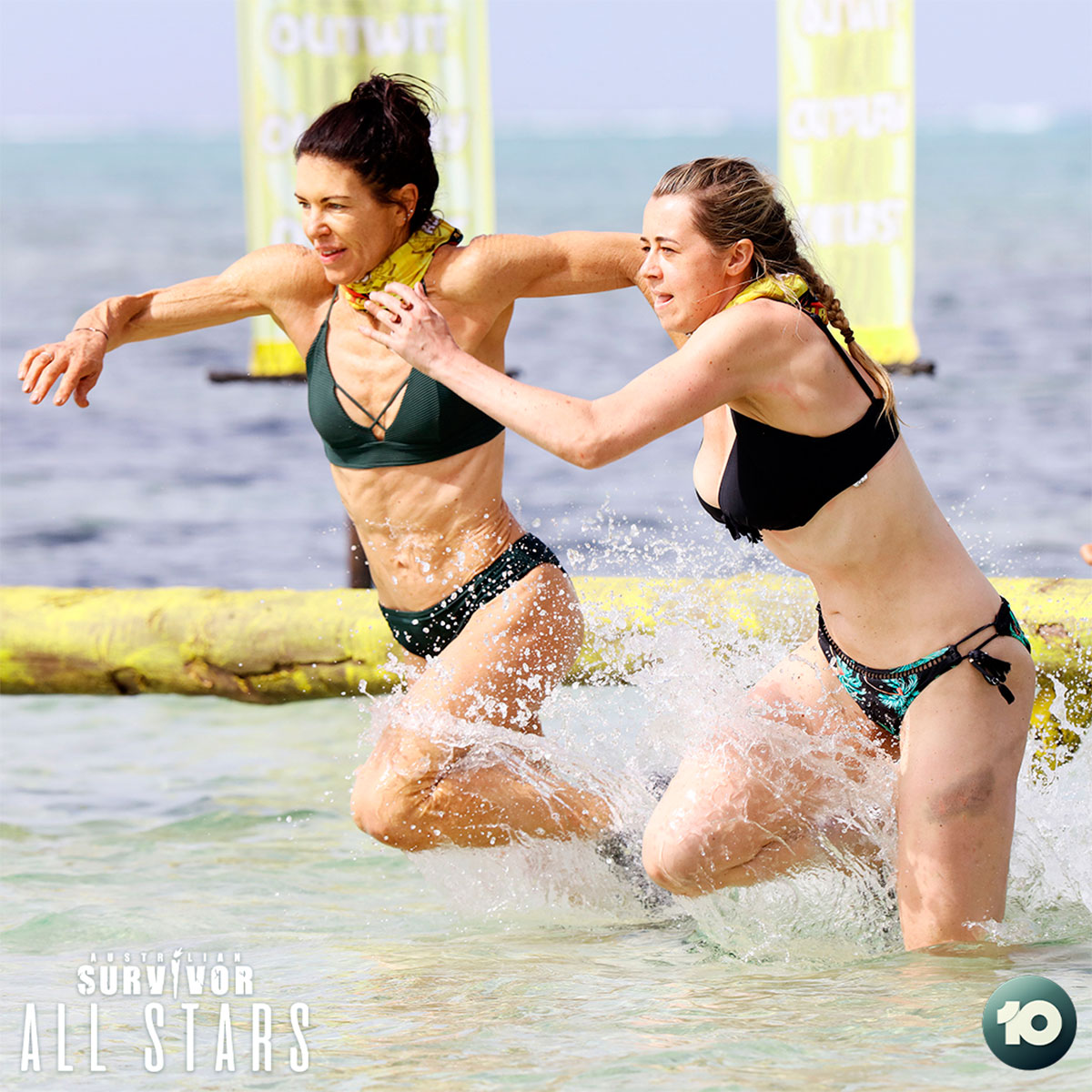 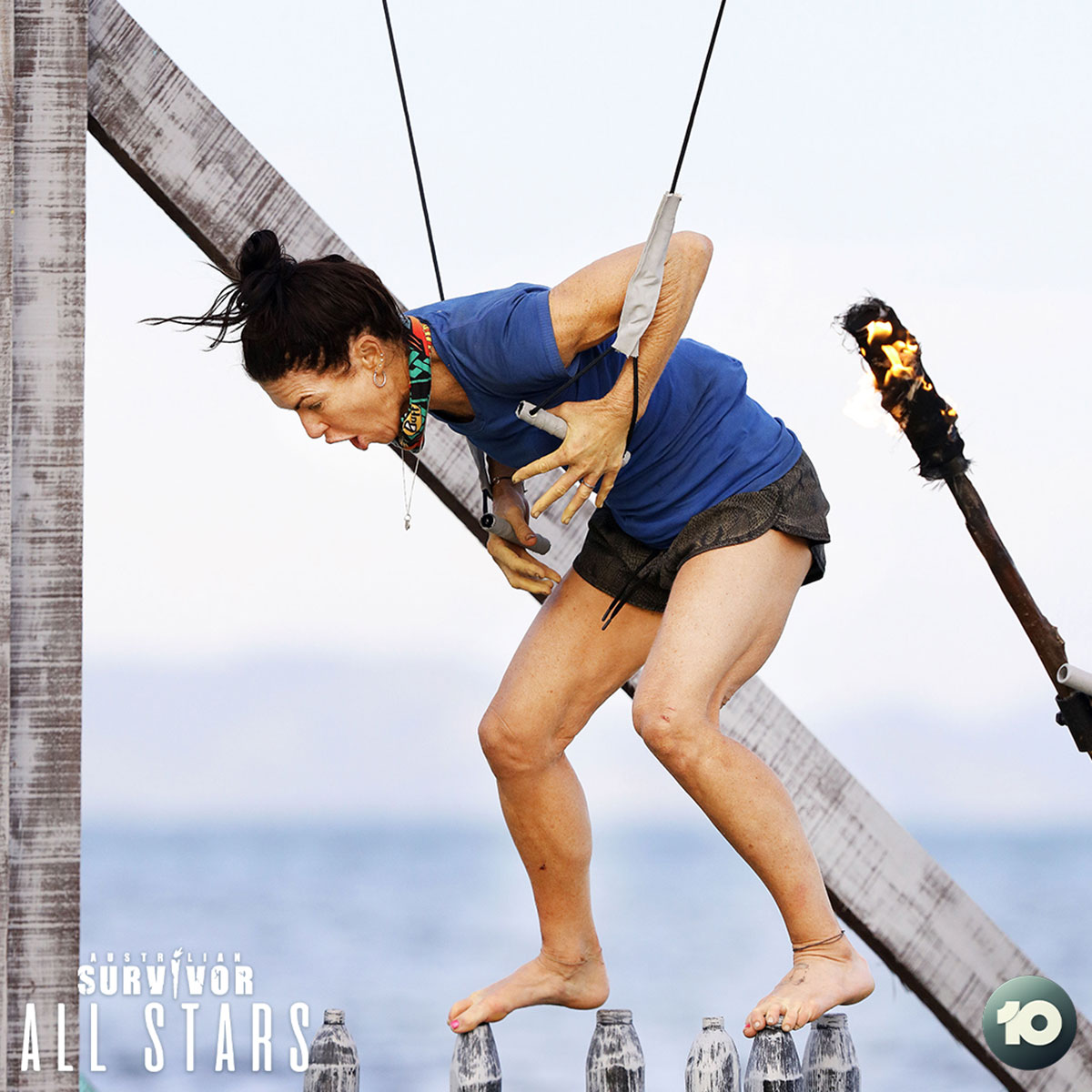 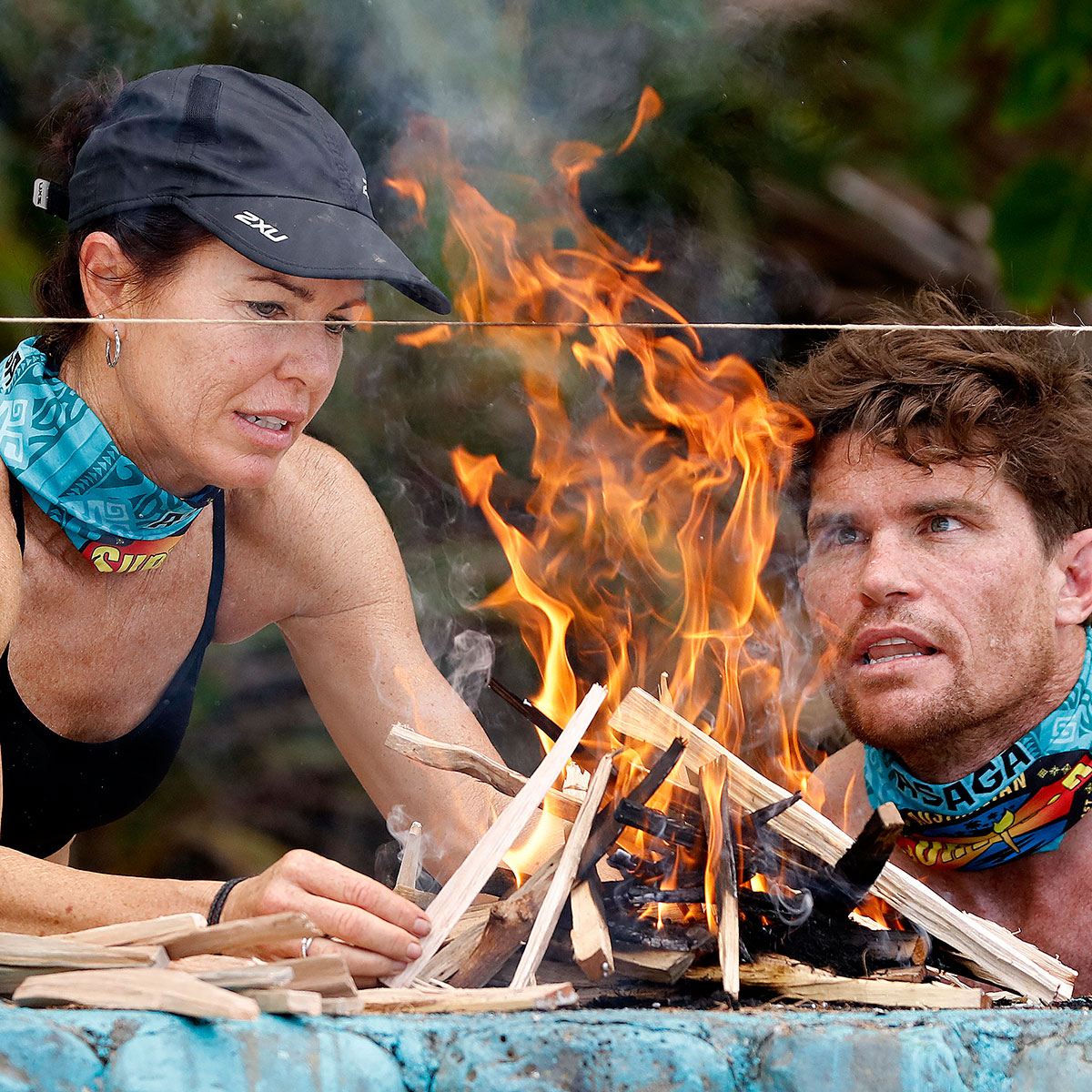 Jacqui on Australian Survivor All Stars

This year 24 people aged between 20 and 51 went to Samoa to battle each other and themselves, mentally, physically and emotionally, in Channel Ten’s popular reality TV offering, Australian Survivor. Only one remained standing as Australia’s Sole Survivor.

Local Marriage Celebrant Byron Bay, Jacqui Patterson was one of those brave contestants. 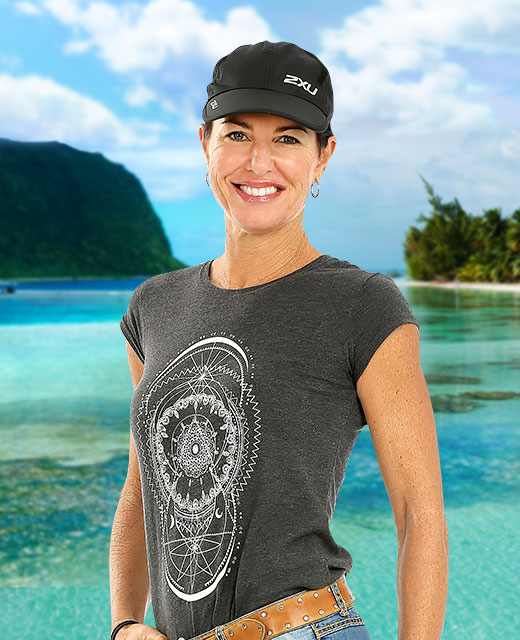 A lover of life

and the odd glass of champagne, Jacqui is a marriage celebrant and at 50, one of the oldest contestants this year. she is super-fit and does boot camp, running, biking and stair work daily to keep her in shape. she also likes to surf with her husband, Gaz. Physically ready, there are a few things on the island that Jacqui was not looking forward to. But she said, ‘I was not excited about sleeping outside and in the rain and cold. I knew that wouldn’t be much fun.’

When asked why she decided to audition and compete with 23,000 others to secure a place on the show, she said, ‘I wanted to demonstrate to women of any age, but particularly of my era, that life doesn’t end at 30 – married with ankle biters, a housewife perm and stuffing your face with cupcakes,’ she said. Women’s Health is something to pursue every day.

‘I felt I had something to prove.’

And we can be pretty sure she did that.For up to 55 days, she and the other contestants, with little sleep and even less food, endured a merciless climate of torrential rain and extreme humidity to outwit, outplay and outlast each other in a bid to take home $500,000.  Each day that they were marooned on the unforgiving, rugged tropical island, they were tested like never before. They had to negotiate their way through the endless perils of social networking, forging strategic alliances and pushing their bodies and their minds past breaking point. Competing in rigorous and demanding physical challenges, they had to learn to fend for themselves to secure even the most basic of needs. If you want to find out how Jacqui fared, you’d better watch the show.

She survived Survivor and now Jacqui Patterson has ticked off another bucket list item by taking out her category in a world body building contest at the Gold Coast. She competed on last year’s season of the reality show Australian Survivor, recently won the over 50’s category at the World ICN bodybuilding titles against five other competitors.

The result is all the more pleasing for Jacqui as she was injured on Australian Survivor – she had four screws in her shoulder after the show – then she battled a stage two melanoma. Taking a positive attitude, the woman who has always been a “fitness nut”, took up strength training in June to help with rehabilitation of her shoulder.

“But I did have a good base to start with – I’ve always worked out in a gym.”

Jacqui also entered the over-40’s category in the same competition to give the “younger girls a run for their money” and came fourth. “I love a challenge, and having a goal. This (strength training) is something I’ve always wanted to do. I live and breather fitness.”

She trained six days a week

to prepare for the bodybuilding competition for about an hour a day. While she thanked her coach, she said her diet was important. “Six packs aren’t made in the gym, they’re made in the supermarket.”

Jacqui has always been very conscious about what she eats, so her calorie controlled preparation was nothing new. As for what’s next, she said she would love to appear on Survivor All Stars show – “I’d do that in a heartbeat.” In the meantime, she continues training and marrying people as a Marriage Celebrant Byron Bay. 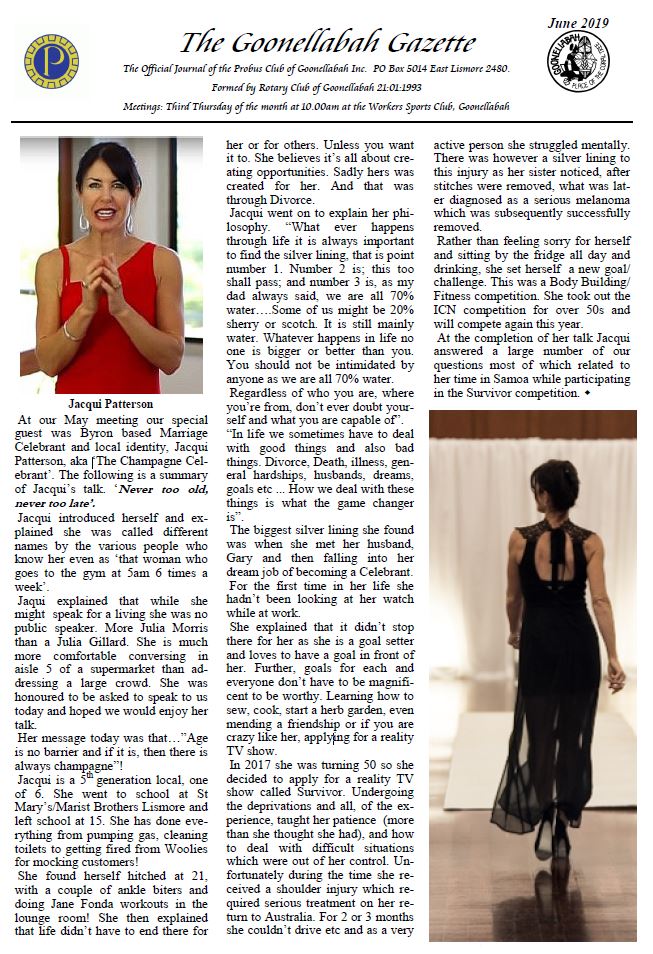 At our May meeting our special guest was Byron based Marriage Celebrant and local identity, Jacqui Patterson, aka ‘The Champagne Celebrant’. The following is a summary of Jacqui’s talk. ‘Never too old, never too late’.

Jacqui introduced herself and explained she was called different names by the various people who know her even as ‘that woman who goes to the gym at 5am 6 times a week’.

She explained that while she might speak for a living she was no public speaker. More Julia Morris than a Julia Gillard. Jacqui is much more comfortable conversing in aisle 5 of a supermarket than ad-dressing a large crowd. She was honoured to be asked to speak to us today and hoped we would enjoy her talk.

Her message today was that…”Age is no barrier and if it is, then there is always champagne”!

Jacqui is a 5th generation local, one of 6.

She went to school at St Mary’s/Marist Brothers Lismore and left school at 15. She has done everything from pumping gas, cleaning toilets to getting fired from Woolies for mocking customers!

Not long after leaving school she found herself hitched at 21, with a couple of ankle biters and doing Jane Fonda workouts in the lounge room! She then explained that life didn’t have to end there for her or for others. Unless you want it to. Jacqui believes it’s all about creating opportunities. Sadly hers was created for her through Divorce.

Jacqui went on to explain her philosophy. “Whatever happens through life it is always important to find the silver lining, that is point number 1. Number 2 is; this too shall pass; and number 3 is, as my dad always said, we are all 70% water. Some of us might be 20% sherry or scotch. It is still mainly water. Whatever happens in life no one is bigger or better than you. You should not be intimidated by anyone as we are all 70% water.

“Regardless of who you are, where you’re from, don’t ever doubt yourself and what you are capable of.”

“In life we sometimes have to deal with good things and also bad things. Divorce, Death, illness, general hardships, husbands, dreams, goals etc … How we deal with these things is what the game changer is”.

The biggest silver lining she found was when she met her husband, …

Gary and then falling into her dream job of becoming a Marriage Celebrant in Byron Bay.

For the first time in her life she hadn’t been looking at her watch while at work.

She explained that it didn’t stop there for her as she is a goal setter and loves to have a goal in front of her. Further, goals for each and everyone don’t have to be magnificent to be worthy. Learning how to sew, cook, start a herb garden, even mending a friendship or if you are crazy like her, applying for a reality TV show.

In 2017 she was turning 50 so she decided to apply for a reality TV show called Survivor.

and all of the survival experience, taught her patience (more than she thought she had), and how to deal with difficult situations which were out of her control. Unfortunately during the time she received a shoulder injury which required serious treatment on her re-turn to Australia. For 2 or 3 months she couldn’t drive etc and as a very active person she struggled mentally. There was however a silver lining to this injury as her sister noticed, after stitches were removed, what was later diagnosed as a serious melanoma which was subsequently successfully removed.

Rather than feeling sorry for herself and sitting by the fridge all day, she set herself a new goal/challenge. This was a Body Building/Fitness competition. She took out the ICN competition for over 50s and will compete again this year.

At the completion of her talk Jacqui answered a large number of our questions most of which related to her time in Samoa while participating in the Australian Survivor Show.